The original Belfast Castle in the city was erected by the Normans around the 12th Century. In 1611 a castle constructed of stone and wood was built in the same location. Which later became the home of a Baron of Belfast Sir Arthur Chichester. Unfortunately this building was destroyed by fire in the early 1700s. All that remains today as a reminder of the original castle in central Belfast are the street names such as Castle Place and Castle Street.

The Chichester family later became the Donegalls. In the late 1800s, the 3rd Marquis of Donegall made a decision to build a new castle within the grounds of the deer park situated on Cave Hill . The design of the castle was similar to the British Royal familiy’s Scottish home at Balmoral built previously in 1853.

The castle was finished in 1870 and as quite often happens at a much larger cost than originally estimated.

The Donegall family wealth had dwindled so much that the castle was nearly left uncompleted. It required the intervention of the 3rd Marquis’s son-in-law, Lord Ashley (and future heir to the Earl of Shaftesbury title), to fund the final build of the project. 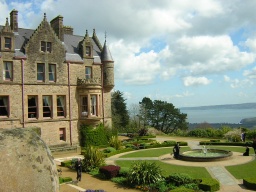 The coat of arms of the Donegall family appears above the front entrance and also on the north facing wall of the castle, while a the Shaftesbury crest is visible on the exterior staircase. This staircase was not part of the originial plans but was added as a birthday present in 1894 by then Earl of Shaftesbury to his mum. This curving Italian style staircase serves to connect the main rooms to the garden terrace with lovely views over Belfast. 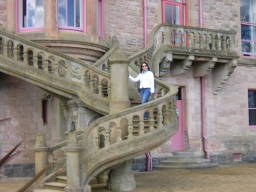 The Shaftesbury family presented the castle and grounds as a gift to the City of Belfast in 1934.
From the late 1940s until the 1970’s the castle was popular as a venue for wedding parties, evening dances and afternoon/high teas. In 1978 the local City Council began a major renovation programme which took ten years and cost over two million pounds. The castle was re-opened officially to the public in November 1988.

The Belfast castle is still in use today and is popular as a venue for weddings, and as a restaurant. There are lovely grounds to stroll around in and the views over Belfast present great opportunities for photographers.

Or by visiting their website at www.belfastcastle.co.uk
More on other Belfast Attractions here