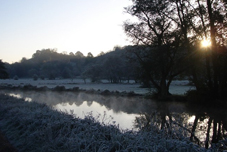 If there was one word that could best describe the Belfast weather it would be ‘capricious’.
You just don’t know what is going to happen next and this really is a city where you can experience four seasons in just one day.

The weather is always a great topic for conversation and if you are ever stuck for something to say then this will be a great subject to get you started. Belfast people love to talk about the weather and even those who have lived in the city all their lives will find it difficult to predict what is going to happen next.

Belfast is considered to have a temperate climate. What this means in simple terms is that it doesn’t get too hot or too cold most of the time. To be more precise Belfast is part of the temperate climate zone that exists between 40° and 70° latitude on the planet. This means that it doesn’t have to deal with the heat of the sub-tropical zone or the cold of the polar zone.

Belfast has four seasons which are easy to distinguish, and the city benefits from mild winters and pleasant summers.

Belfast can get a lot of rain; less than what they will experience in Scottish Highlands but more than down south in Dublin. There is on average about 846 mm of rain to put up with over the year. Recent winters have been a bit extreme but generally speaking Belfast doesn’t usually get more than 10 days of snow each year – this is due to the fact that it is near to the sea and such built up area. Belfast is known for getting days during the winter that are unseasonably warm, and this is something that is welcome to residents and visitors alike.

Summers can be very pleasant in Belfast with average temperatures around 18° Celsius; there is usually at least a few days during the summer months when you will get temperatures as high as 27 ° Celsius . The hottest day on record occurred in July 1983 when temperatures soared to 30.8 °C. As we already mentioned the weather can be a bit unpredictable and so having an umbrella nearby might come in handy even on a summer’s day.

What Visitors to Belfast Should Expect from the Weather

The fact that there doesn’t tend to be too much extremes with the Belfast weather is good news for the visitor to the city. It means that you can explore the city in comfort on almost any day of the year. There is as much to see and do in the city during the winter as there is during the summer. It does make sense to be prepared for a bit of rain, and if you are arriving during the winter you will almost certainly want a warm jacket. Wearing a couple of layers of clothing is a good idea during the summer is a good idea because you can add and remove
these in response to the weather.