Of all the big stores in Belfast, Ikea is probably the one I like the most.(maybe it is the hidden interior designer in me!)

The founder of the world’s top furniture retailer which began in Sweden, was called Ingvar Kampard and as a child he lived in Elmtaryd Agunnaryd, hence the origins of the name Ikea. The company designs its own furniture and housewares, which is made in 5O different countries and sold worldwide. In December 2007 Ikea opened in Belfast, it is located close to the George Best City Airport at the Holywwod Exchange on the eastern suburbs of Belfast.

The store is huge about 30,000sq metres and along with a multi storey car park also has a restaurant, bistro and crèche facilities. Most of the larger items are flat packed and can be delivered to and assembled in your home by friendly efficient staff. In 2007 522 million people (plus 1 more ie:me ) visited Ikea worldwide. 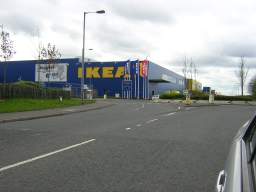 Have you been to Ikea in Belfast?, or do you have another favourite store in Belfast Northern Ireland, let us know through contact us page.
Return to Belfast Business Directory with this link.