The area around present day Belfast, has been occupied since the Bronze Age. The remains of these early irish settlers are still visible today. An example of which, is the Giant’s Ring henge (a prehistorical architectural ritual structure, see pic below) located close to Shaws Bridge in leafy south Belfast.

The name Belfast comes from the Irish words ‘Beal Feirste’,which roughly translated means the “mouth of the farset river”.

The Farset river is a tributary of the Lagan river which joins the Lagan close to where it flows out into the sea at Belfast Lough (interestingly the farset river still flows today encased in a tunnel under the city’s High Street).

The modern city of Belfast was founded at a sandy ford (river crossing), across the Farset river with the construction of a Norman fort in 1177 near this crossing.The area around these river banks, later served as the quaysides of the growing merchant port in the 1700s. Many of the cities structures and buildings grew up around this area with the development of the port in the 1800s and the growing linen trade.

• In the 1700s Belfast’s presence on the world stage grows as the city becoming a major linen-producer and exporting centre. 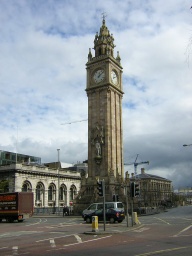 • Belfast is granted city status by Queen Victoria in 1888 as a reward for its thriving industry and plans are laid for the construction of a city hall.

• Belfast continues to flourish becoming one of the world’s great industrial cities and many of its major buildings are constructed.The city hall is opened in 1906.

• In May 1911 the RMS Titanic is launched from the Harland & Wolff shipyard. Tradegy strikes the following year on April 15th 1912 when it sinks on its maiden voyage with the loss of more than 1500 lives in the cold icy sea off Newfoundland.

• After the 1919-21 War of Irish Independence, six of the country’s 32 counties remain under British rule and the state of Northern Ireland comes into existence with a majority protestant controlled local government. Its capital city is Belfast.

• From 1969 “the Troubles” violence, flares spanning nearly 3 decades and costing more than 3000 deaths and huge destruction of businesses and property.

• 1985 The Irish and British governments sign what is known as the Anglo Irish Agreement, which gives the Republic of Ireland a influence in Northern Ireland politics.

• Throughout the 1990s violence continues with the British, Irish and United States governments attemping to find a political solution to Northern Ireland’s political problems.

• August 1994, the Nationalist IRA announces “a complete cessation of military operations”. The other side the Protestant Combined Loyalist Military Command follows in October with a ceasefire the same year.

• The security and British troop numbers are reduced throughout Northern Ireland.

• April 1998, The Good Friday Agreement is voted in by more than 70% of voters. It outlines a new power-sharing local government Assembly, an early release of all paramilitary prisoners, a gradual withdrawal of British soldiers and decommissioning of paramilitary weapons. On November 30th the same year US President Clinton pays an historic visit to Northern Ireland. (switching on the Christmas lights in Belfast amongst other things!)

• 2000. The Northern Ireland Assembly government is suspended following the breakdown of decommissioning talks.

• 2002. The Assembly local government is dissolved and direct rule from the British parliament in London returns.

• 2005. The IRA formally orders an end to its armed campaign

MY OWN BELFAST HISTORY

November 2003 I meet my Belfast Husband to be in Newcastle England.

Two weeks later I moved to live with him in Belfast.

We moved to a lovely little village called Moira 15 minutes drive outside Belfast in July 2005…and live happily ever after with three crazy kids, Alec, Grace and Harry (my husband is living especially happily ever after as he has put on 25kgs!)

March 2009 I decide to make a website to spread the news about Belfast and Northern Ireland to the rest of the world,(my husband decides to lose weight).
Find out about Belfast Sayings here (learn Belfast Speak!)

Add your own little piece of Belfast history through our mail id.